Part of the fun of living multi-lingually in a multilingual region is having all the bits of languages that I know jumbling about my head as well as on on the packaging.  In Switzerland, everything is printed in at least German, French and Italian. In nearby France where I did my grocery shopping yesterday, it’s often in Dutch, Spanish, even (depending on the store) Flemish in addition to French. Mostly it’s fun to see what other people might be in the habit of calling ‘Toothpaste’ ; “Tandpasta” is apparently what they call it in Flemish (at least I think it’s Flemish – it’s from the Belgium owned store.)

However, sometimes it makes for an interesting combination of international words.  Even though there aren’t too many kinds of gluten-free bread to choose from, I somehow lost my appetite for this one. I just don’t think I want the letter combination ‘molde’ in any way associated with my bread. 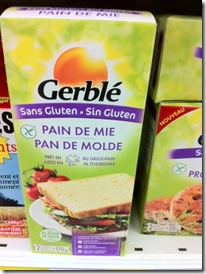