Doesn’t Advent come at just the right time every year? 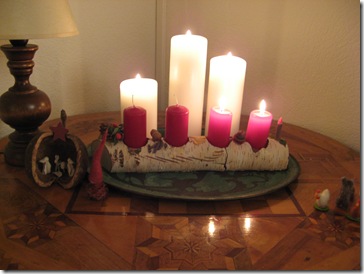 Just when things were getting too dark and too bleak, it is time to light our candles and look forward.

This year we bought an Advent Log at the village Christmas Market - Craft Fair. That and the other candles behind it are creating a ‘corner of flame’ which helps to make up for the lack of a fireplace. 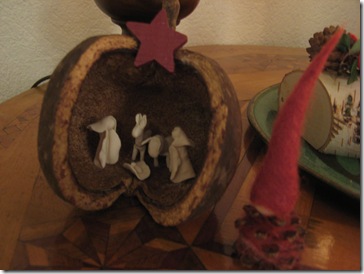 We also purchased a tiny Creche in a gourd. And a pointy hatted pine cone gnome who is standing in for one of the shepherds, I think.

In the village I’ve been surprised at how many people put up Christmas lights (I thought it was just a crazy American thing – but it’s apparently catching on – there are lighted reindeer on the neighbor’s front lawn) and also surprised at how cheerful they make me feel. Each little village has some kind of lighted decoration on the lamp posts and they do help chase away the gloom when you drive through on the windy roads after dark.

I hope, though, that I could prepare for Christmas in Advent without the help of thousands of little lights. Millions of Christians do around the world. Millions don’t have the liberty to do any kind of public celebrating of the birth of Jesus.

Thoughts like that make make lighted snowflake decorations so trivial, but I do think that it is the beautiful irony of God that He came into the world at the darkest time (at least in the Northern Hemisphere) of the year. I think it’s no mistake that He caused Jesus’ birth to be celebrated on a date that was originally a pagan festival of light.

It’s like He’s saying with a smile, “Oh my dears, you think that is light. Watch this! I’ll show you Light! Here is my Son.”

It hits me harder every year, as I look around with an honest eye at the troubles of the world, the troubles of my own heart, that He came into this. Here. This huge mess of load of crap that we’ve made of His creation. This dark place of desperation and despair. He came to rescue us. He came to be with us. God with us. Emmanuel.

A few years ago Zeus and I went to see the film Children of Men. I’m not sure I can recommend it; much more violent and despairing than our usual movie fare. But there was one scene in which the main character is trying desperately to find a quiet place amidst chaos and filth and violence for a pregnant woman to have her baby.  That was probably the most realistic depiction of Joseph and Mary’s journey that I’ve ever seen.  It somehow captured all the futility and anger and death of a world controlled by sin, and then the unbelievable hope brought by the birth of One Child. It was beautiful.

When we left the theater, Zeus let me know he thought the film was horrible.

“But didn’t you like the beautiful parts?” I asked.

“WHAT beautiful parts??!!”  I guess the Nativity metaphor didn’t work for everyone. I lost movie choosing privileges for awhile after that.

So every Advent, I find myself thinking about that film and about how much more the real Nativity must have been like that than the sweet peaceful Playmobil Nativity set that is spread all over the table.

And I’m grateful and I’m hopeful and I light another candle and I wait another week.