Zeus planned to be around home that day to hold down the fort. I left him with an easy lunch for those children, and then I drove to pick up Tata for an outing to Basel. Once every six weeks or so she goes to her hairdresser in Basel and gets a taste of the big city, so this time we planned that I would go along. From here by car, it is actually quicker to go through France, so that is what we did. It takes about an hour.

It was a lovely day, and once we had navigated numerous tiny French villages with bad signing and the busy approach to downtown Basel, we parked and walked around the old city. I accompanied Tata on foot to the hairdresser where I was introduced to Olivier, he of the intense eye and swooping bang.

“AH!” he said intensely fixing me with his sharp brown gaze, “The American!!”
“er… yeah.” I mumbled and excused myself, feeling not so gorgeously dressed and therefore perhaps a bad fashion representative of my country.

Then I had a lovely two hours to myself in downtown Basel, going into shops, going out of shops, hunting in vain for a crock pot, buying cheddar cheese, at last finding a few fun new items of clothing to buy with some birthday money. Here is what struck me as I meandered around: 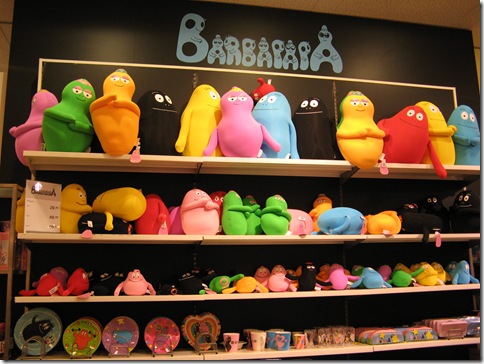 A whole wall of Barbapapa goodies!!! Barbapapa is a French cartoon character that is like a blob of playdoh with eyes who can change into any shape he likes. His wife and many covenant children who are pictured above also have this amazing ability. Hep, hep, hep, and he’s a boat to take the whole family sailing! Hep, hep, hep, and he’s a carousel ride for the town children while his wife becomes a circus tent and the children all the circus animals!  At parties back home, when the children needed a little down time, we’d put on a Barbapapa DVD and they were mesmerized. None of our little friends seemed to mind that it was all in French. They just knew that this was the right kind of guy to have around – hey, he might turn into a rocket ship! Hep, hep, hep, une bonne chose de faite! 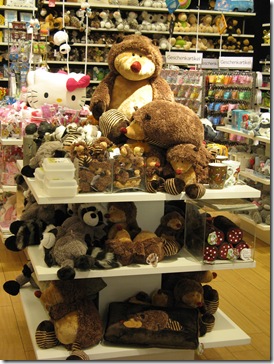 There was also a large display of all things Hedgehog. 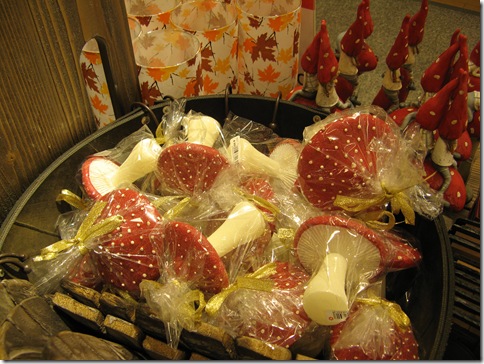 And another one with a basket of my favorite things:  mushrooms!

However, upstairs in the housewares, there was a definite style trend towards all things and colors American. Interesting, isn’t it? In the States, to sell something we put a “Euro” prefix on it: a Eurotreatment, a Eurospa, a Eurotoothbrush. What that usually means is “more expensive.” We decorate with maps of France and Italy and miniature Eiffel towers. Well, looky what they’re doing over here! 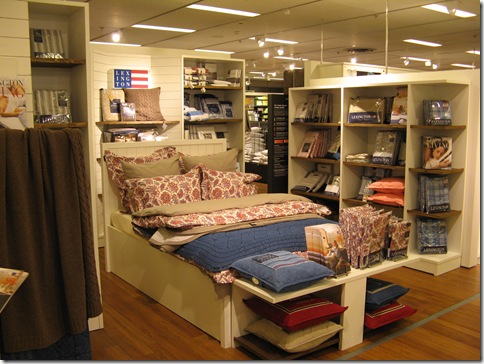 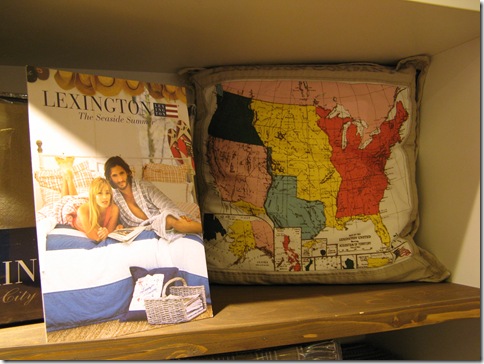 The map on the pillow says, “Lexington United.” I have never heard of that country.

In another store, while looking at a rack of filmy t-shirts with the label “American Vintage” selling for CHF 79 (approximately $79) and thinking that I had never paid $79 for a t-shirt, filmy, vintage or otherwise, my cell phone rang, and I got another nice birthday gift: Zeus was calling me to tell me he had just gotten a nice job offer from a certain Swiss pharmaceutical company headquartered right there in Basel! We would not actually have to survive the winter eating moldy apples from the orchard! Very nice news indeed, but it still didn’t make me want to buy an overpriced t-shirt. I found mine a little later at a better deal. 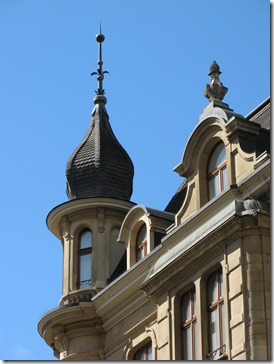 An architectural detail that pleased me 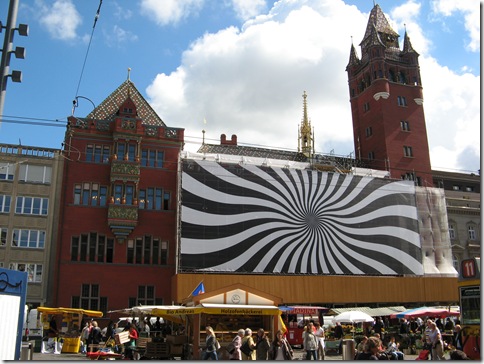 The Basler Rathaus, or town hall, with daily market. It is painted a very dramatic red with details painted out in bright gold, green and blue, but why there was a huge optical weirdness flag hanging in front I did not learn. It is making my eyes weird out just looking at the photo. I do not approve. 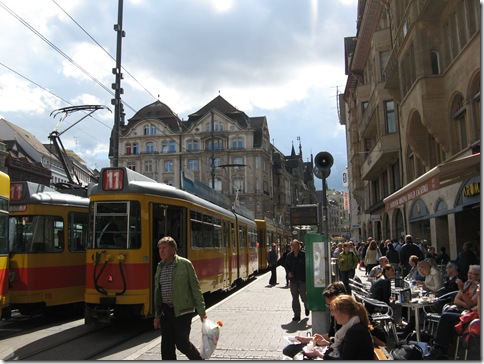 On the Rathaus square, a very busy place to catch trams.

I am a little embarrassed to say how nice it felt to be anonymous in a big city, no one knowing my business, and no one really caring either, not even the lady in the housewares department of one store where I asked about a crock pot.

When the matter was pursued, it turned out that they could order one for me, but you had to do blahblahblahblah and anyway she wasn’t about to tell me about it. Oh, well – my money walks.

Basel is a nice city – like all Swiss cities somewhat modest, but somehow less uptight than Zurich and less pompous than Geneva. It seems a decent mix of the normal and the international, bordering as it does on two other countries.

Erasmus of Rotterdam lived in Basel, which is why I believe he was called “of Rotterdam.” If he’d stayed there, he would have had to have a different nickname, like Mr. Longnose. 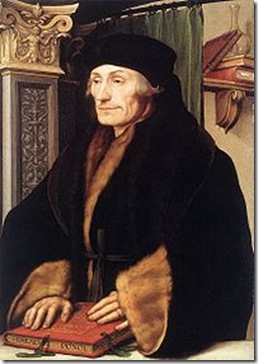 He is the most famous Humanist of the Renaissance, and his work in preparing a new Greek New Testament paved the way for the Reformation. Both Martin Luther and John Calvin were reading Erasmus’ Greek New Testament when they came to understand that Scripture taught grace by faith alone. He agreed with them about many of the abuses of the Catholic church, but in the end, thought they went too far in separating from it, and he stayed in the Catholic church. He also tightly held to the doctrine of man’s free will. And that’s Erasmus!

Okay, all done little history lesson for the day.

After a couple hours Tata and I met up again, and she took me to lunch at a very chic restaurant overlooking the Rhine River – it’s just at the far end of the bridge. 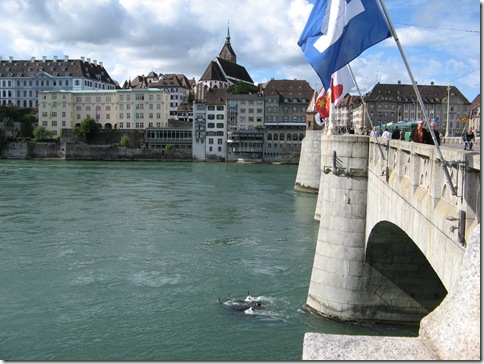 The Rhine has grown quite a bit since last we saw her, high in the Alps. 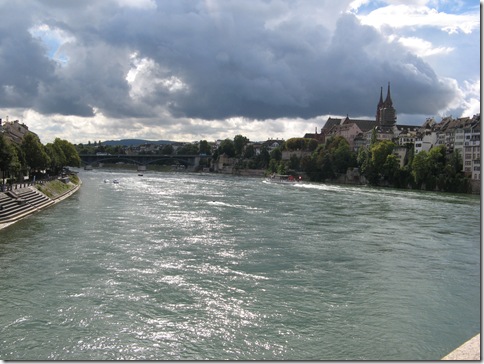 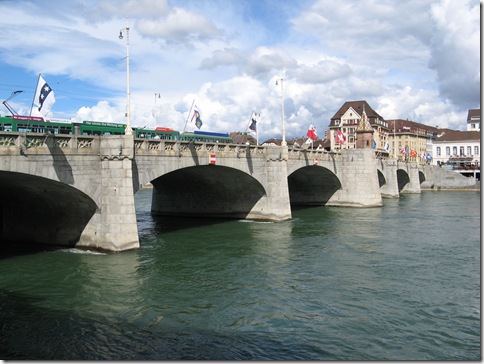 This was the view from the restroom of the restaurant. 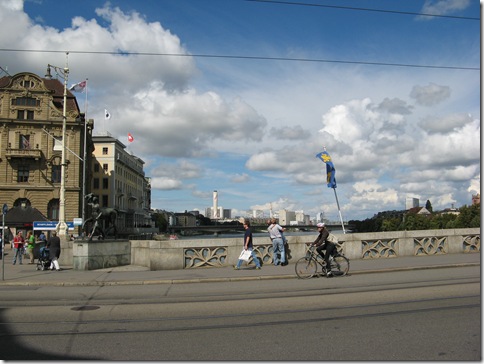 Back up above at street level and looking north and across the bridge downriver, you can see the buildings in the distance which belong to Novartis, the aforementioned pharmaceutical company. I have learned that it is a larger company than Microsoft, which put things into better perspective for me. Wow.

Our lunch finished, Tata and I puttered some more in shops,and she made me a present of a gorgeous flower arrangement that is still gracing Tante Lina’s buffet. 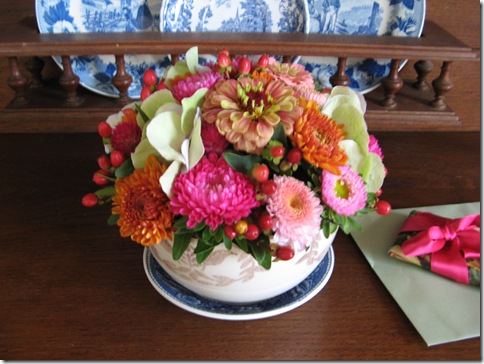 We loaded up the car, made our way out of the city, through all the French villages with bad signing, back across the border to our own village.

Where my family was preparing a dinner party! 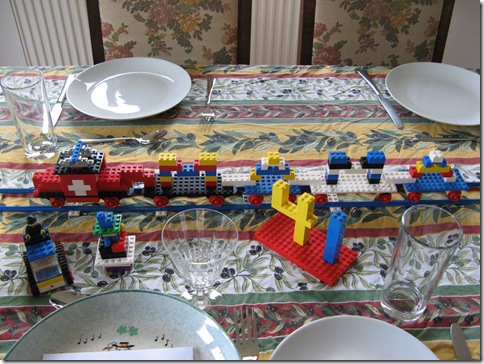 with a traditional Lego creation – this time a train that actually moved on the track! 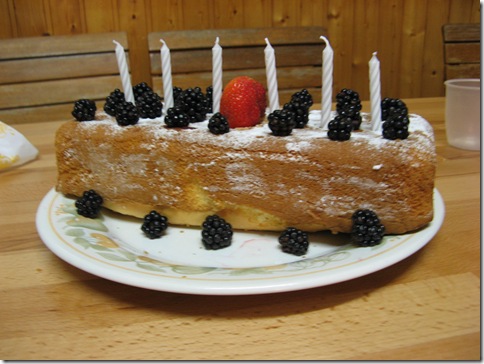 and a delicious gluten-free cake with berries from the garden! 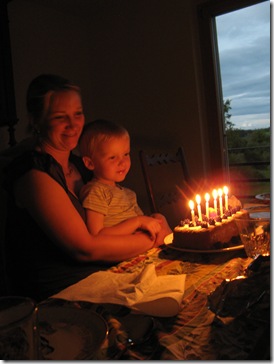 Thank you everyone for a wonderful day!