Up in the Swiss Alps

I wrote this post last week, but could not post it then due to the fact that the neighbor whose unsecured wireless network we were usurping needs to update and get a stronger signal! C’mon neighbor, the world is waiting!

Today we have been in Switzerland one week. One long, full, hot week. If you hadn’t already concluded from my last post about muskrats (???) the weariness and heat had addled my brains a bit. So then, just in time on Sunday we left to spend a week in the mountains. Cooler nights, a little familiarity, no big agenda, no house to pack up, no house to unpack into.

Our first night here I found a German book on the shelf about cures, as in turn-of-the-century-take-the-waters-and-eat-Muesli cures. Because I was curious and because it’s good German practice, I read the chapter about the “cure day.” It described a nice progression of waking early and “taking the waters” (sitting in them or drinking them, I’m not sure), long walks in the forests and fields, rest, healthy meals, more rests, more water, more walks, more rest. I determined during my stay to follow the cure! The last two nights I’ve finally slept through, awakening only briefly, and I think I’m starting to unfrazzle after months of preparation stress.

As much as the Natal Village doesn’t look like a stereotypical picture of Switzerland, the region where we are this week does. This is the town and the house where Zeus’ mother Tata grew up. She and her brother have kept the apartment in which they grew up, and that is where we get to stay. The language here is Romantsch, the fourth language of Switzerland, spoken by only about 60,000 people. In Romantsch, Tata means Grandmother.

The village of Trun. We stay in the house just to the left of the church. 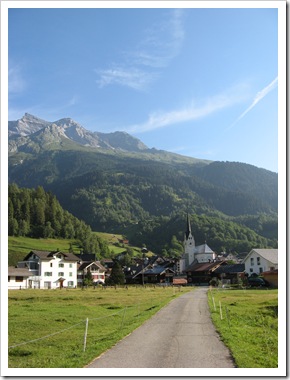 The house closer up-Zeus is on the balcony. It was built in 1764. 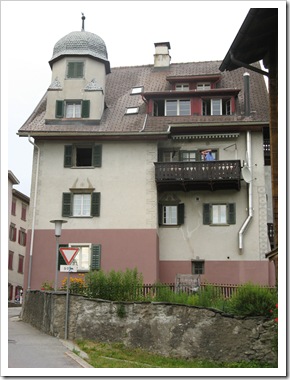 Another view of the village. You can see the church of Maria Licht – Light of Mary – up the mountainside on the left. 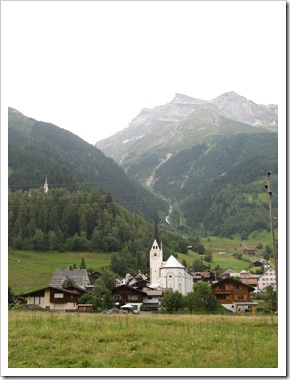 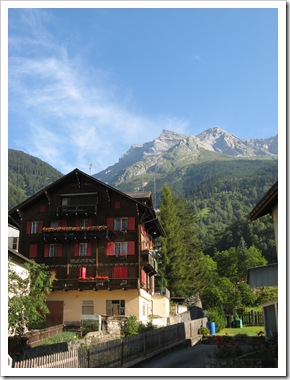 View from the window, looking west up the valley to the Oberalp Pass. 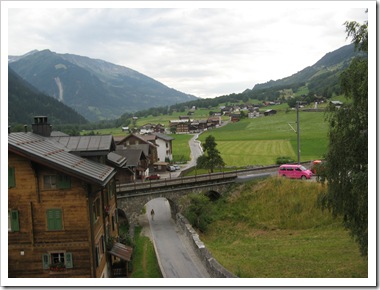 The train tracks pass right by the house. The little red trains cross in Trun, so every hour, on the hour, one train comes down the valley and a few minutes later, another one goes up the valley. Swiss timeliness has new meaning when once an hour, the bells in the nearby clock tower chime, and before they have finished the little red train can be heard chugging by. Hermes LOVES watching the train, and twice an hour runs out onto the balcony crying, “TRAIN!” with arms outstretched. 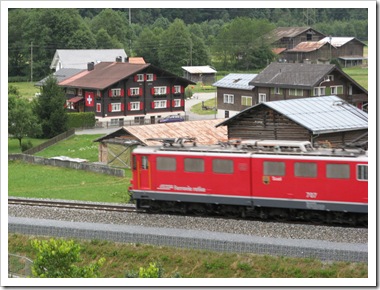 In keeping with the cure book, I’ve been going for lots of walks. The first morning Bella and I got up before anyone else was awake and set off to enjoy the sunshine and fresh air.

I think Bella is enjoying Switzerland. She’s getting lots of attention and lots of walks, and there are lots of new smells to sample. Also, dogs are generally welcome in restaurants and cafes, although we haven’t tested that yet. 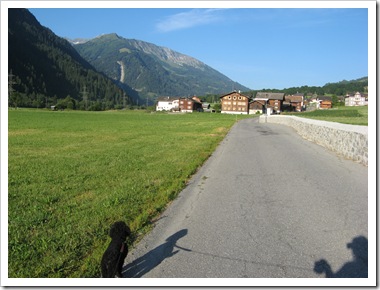 Some cows having morning snuggles. These were not wearing bells on their collars which was a little disappointing, but as I type I can hear bells on a couple of cows who have been re-stationed in a patch of grass across the road next to the museum. 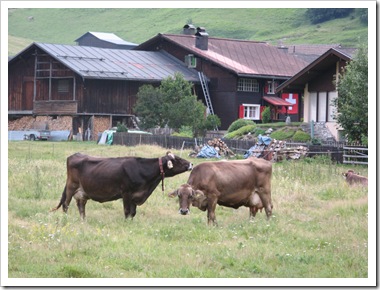 Setting off on a little walk to the Rhine. 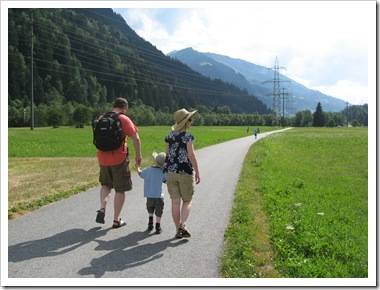 Yellow Wanderweg signs. These are everywhere in Switzerland and direct you to hiking trails to various destinations. 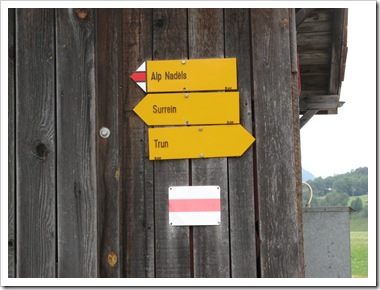 I have a thing for Swiss woodpiles. They are just so…tidy. And stacked. And round. 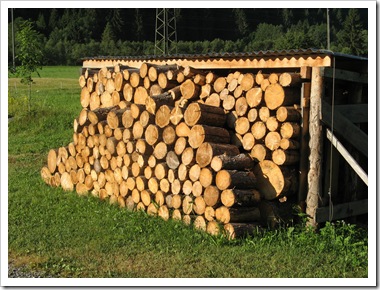 The Rhine River. You know, the mighty Rhine River, border between France and Germany, home of great ports, transporter of many goods and people. Here it is soon after its birth in the mountains, as a small toddler Rhine. 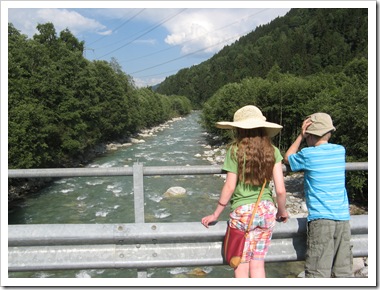 A picnic down by the Rhine. It is a good place to cool off hot toes. 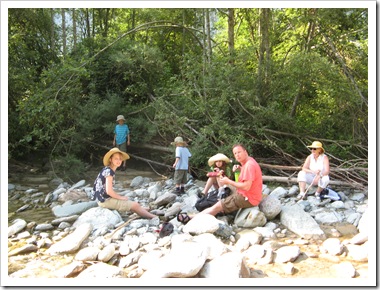 Tuesday’s hike up at Brigels – the kids practicing their Sound of Music moves in a cow-free meadow. 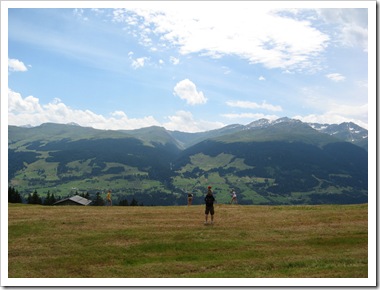 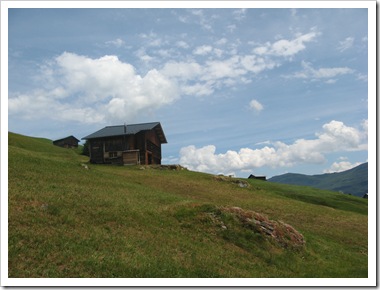 Tata on the road above Brigels. 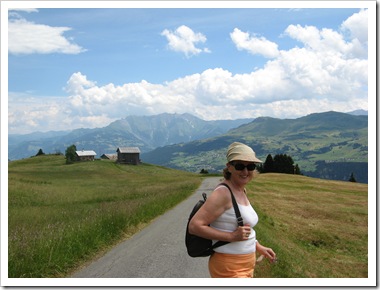 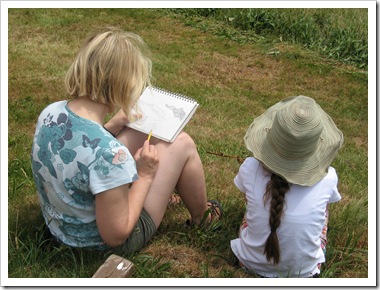 Looking down to the valley below. The bottom of the valley where Trun is can’t even be seen here, it’s down below the ridge. 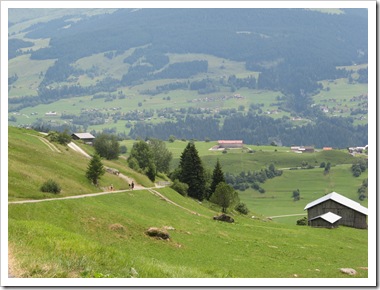 This past year’s scientific studies keep coming to mind as I look at the surrounding landscape. I’m trying not to make my family crazy with my repetitions of Flood geo-morphology, but there is much of this dramatic landscape that it is quite possible to imagine being formed by catastrophic floodwaters and tectonic activity.  Here is an interesting bit of mountain that got me pondering. 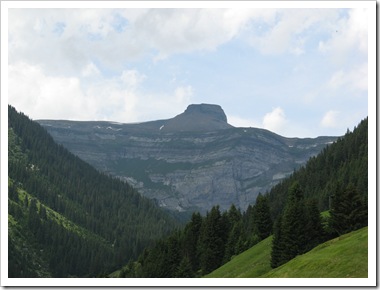 After our hike, Hermes cooling off in the village fountain put up by his great great uncle Alois, older brother of Great Uncle Zarli. 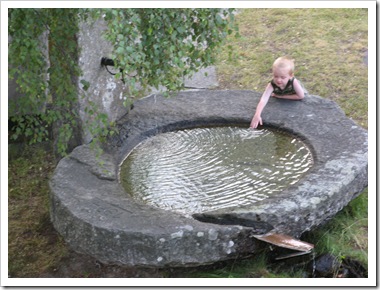 A bouquet of Alpine flowers – souvenir from our hike. 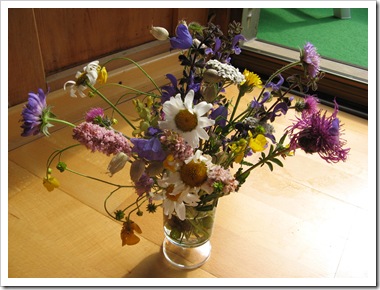