Here is the rest of our week in the mountains. After our hike on Tuesday, on Wednesday we did a little supply and thrift shopping in the nearby big/little town and then we drove back to Trun on the scenic route. Here we are looking alpine! It makes me want to break out in song!

We wanted to show the kids where we had hiked the day before. In the background, on the right is Brigels (do you recognize that funny bit of table-ish mountain just above our heads?) We had taken the chairlift up from the village to just below the top tree line and hiked back down. It felt so funny to be able to see it so clearly from so far away. It’s a very vertical world and it’s a little like the Grand Canyon where you can see vast distances across from you and things far below even though you cannot reach them easily. Once again you cannot see the valley floor from here (also like the Grand Canyon); it is far below. And I think I forgot to mention last time that after our hike from the day before, and a little dip in the village swimming pond, Zeus and Athena hiked the roughly 8 miles (down and up and down and out of the photo to the lower left) back to Trun. Thena is tough!! But her legs were rather sore on Wednesday and maybe that is why she looks a little peaked in this photo – she wasn’t that keen on going shopping, but would have been quite happy to flop instead. 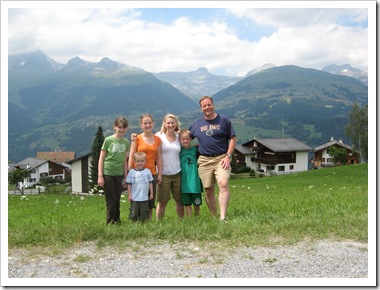 Thursday we went for another hike, only this time we went the other direction, up the valley towards the View Larger Map' target=_blank>Oberalp Pass (you are following along on your atlas of Switzerland, aren’t you?) We left the car in Disentis and then took the train up to Sedrun, had lunch and walked back down to Disentis. This was Bella’s first ever train ride! and Hermes’ first ride that he can remember. Who looks more excited? 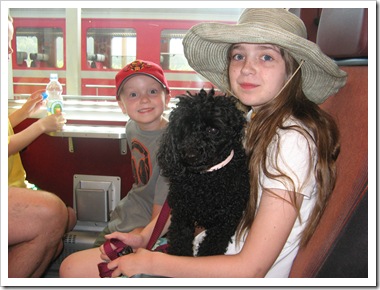 Along the trail, looking up to the Oberalp Pass. Big flopsy sun hats are not a requirement, but a definite benefit as the sun is strong at this altitude. 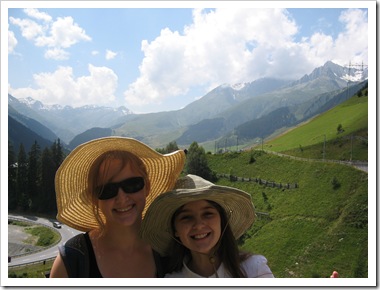 Mountain wildlife. I was just amazed at the size of this snail! He is robust from snacking on all the mountain herbs!

Seriously, I don’t think I have ever seen so many butterflies as on our two hikes – swarms of them, mostly small and beautiful neon colors – shades of blue and orange mostly. I was also struck by the abundance of mountain flowers blooming in the meadows. I think I am helped by the fact that in the twelve years since I’ve lived here, my familiarity with flora in general has increased and I was able to categorize them somewhat – wild lupin, daisies, angelica, yarrow, pinks, campanula, fireweed, foxgloves, buttercups and tons more that I don’t know the name of. 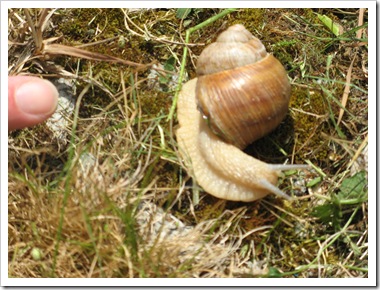 Walking toward one of the abundant little chapels along the way, accompanied by our faithful hound. Notice the narrow road on the right leading into the background. 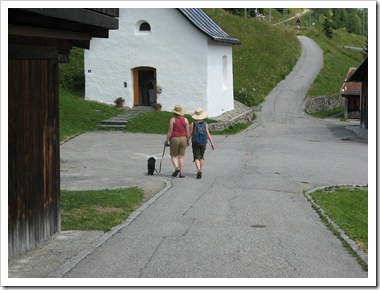 Here is the street sign on the narrow road. Not sure, but I am guessing that it means “Roman Road.” It fits, because the Romans definitely conquered and settled this area – leaving their language behind which became Romantsch – and this path is along the main route to the pass which leads to another pass which leads to Italy and Rome. Inside the little chapel – the girls are standing right inside the door. It is very small! 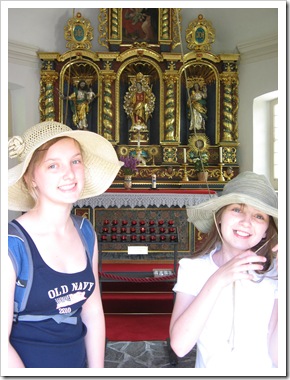 Athena and I keep falling behind because in our souls we are foragers and gatherers. First we came upon a patch of wild strawberries. Mmmm!! I’ve read in books about the heady perfume of wild strawberries ~ it’s true! We gathered this many and then hurried to catch up to share them. By the time we reached the others we had only a few left…mmm…tasty! 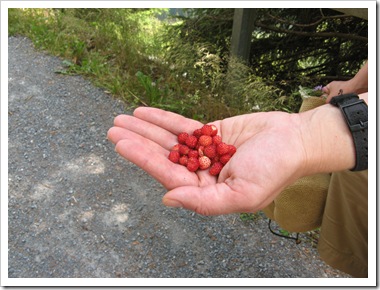 Then, after passing a hillside covered in wild raspberry bushes that need only a few more weeks to ripen, we came upon a patch of mountain blueberries! How could we keep from stopping once again? Blueberries are a favorite of the boys, so here is a photo I snapped as I offered them to them. You can see their hands ready to swoop down for the nummies. 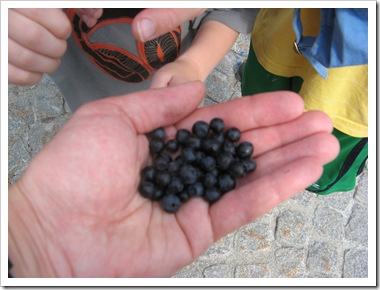 We also filled her hat full of Wild Mountain Thyme – just like the song! – which we are currently drying for culinary use.

Here is the quiet village where the boys were waiting for us by a fountain and we shared our blueberries. Then Zeus pointed out the street sign. 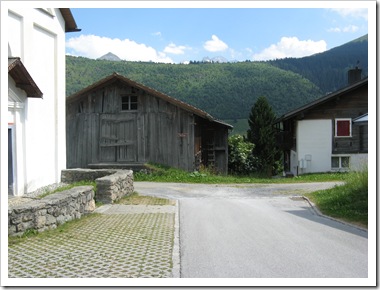 Here is a close-up. Hmmm. Well, in Romantsch, the word “Crap” means summit or peak, as in Crap Rainier, or Crap St. Helens. Here, this is the road to the Craps, plural. So next time someone scolds you for using that word, just tell ‘em you are speakin’ a little Romantsch. 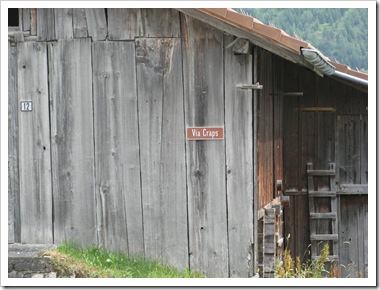 More mountains – because they are there. 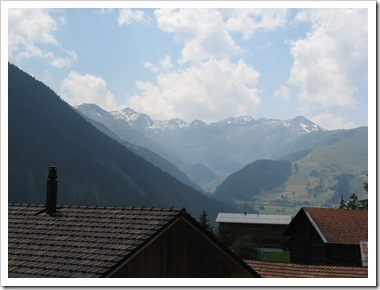 These little red benches are everywhere along the paths – just in the places where you would want to take in the view or eat your picnic lunch. They make me happy because they are red, like the trains and the flag. 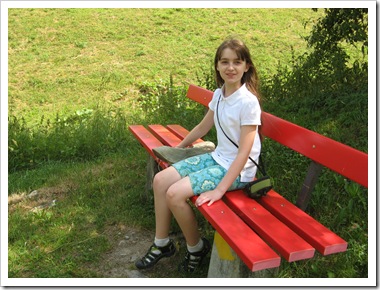 Looking east down the valley to Disentis, our goal. Trun is down there too, further along. The power lines are from the hydroelectric dams and power plants up the valleys. Like Washington State, Switzerland produces and uses a lot of hydroelectric power. 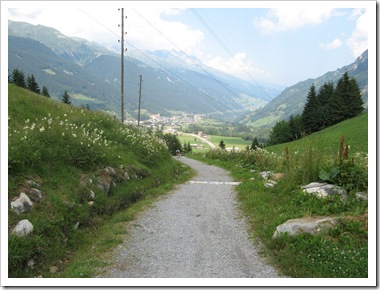 We came across another patch of wild blueberries. 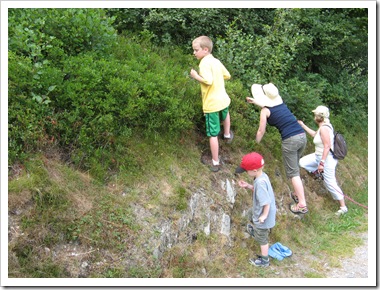 “Boy on a Field of Green” 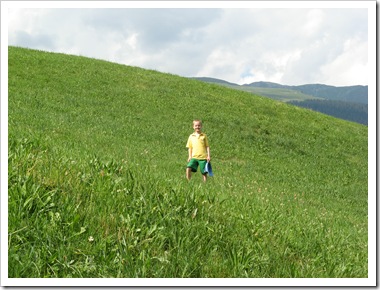 Zeus was a trooper. He got a touch of some bug and didn’t feel that great when we set out. But he didn’t want to abandon us, so he kept up even though his tummy was upset, even carrying Hermes when he got tired. Here, near the end of our hike, he barfed behind the alpine bush on the left. I didn’t learn this until later (we were gathering wild flowers again) or I wouldn’t have made him pose for a photo. 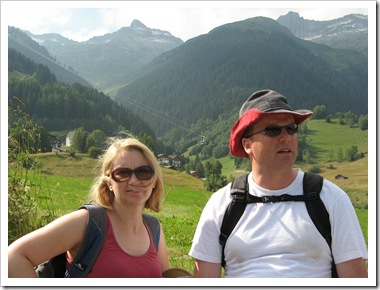 Now, maybe I shouldn’t be sharing this in a blog – but otherwise maybe you would be tempted to think that everything was perfectly lovely all of the time and that no one was ever crabby or that the children never complained that it was hot or that their feet hurt and they never said an unkind word to a sibling or that no one ever got sick behind a bush. You might be tempted to think that if you get to go live in Switzerland for awhile your life becomes as gorgeous and unmarred as the surroundings.

It’s not true! Switzerland has jaw-dropping scenery, but we marred it by taking our imperfect-in-need-of-redemption-and-forgiveness selves along. Thank Heavens (literally!) for our Heavenly Father whom we can thank for all this natural beauty and in the same breath ask for more grace and more patience and more kindness to give to the dear ones around us.

One of the many fields filled with wild flowers. This one is for our friends the Baileys – a field of Angelica! 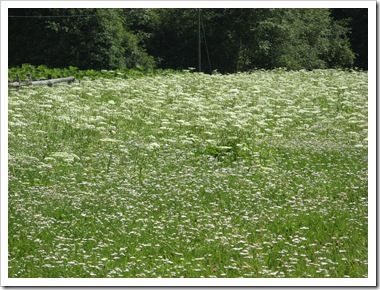 Ta-Da! The end of our hike. 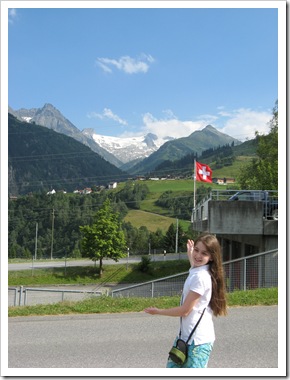 Friday was a quieter day. Zeus slept off his bug most of the day and the kids and I went to the playground and then back to the Rhine River where they built a wonderful rock dam to make a dipping pool. (There aren’t enough dams on the Rhine yet.) I took pictures but they are in my camera which has gone missing. That is another concern and another story. Saturday we packed up and drove over the Oberalppass, past Lucerne and back to Boncourt – back to “real life.” Stay tuned!