Muskrats of the World, Unite!

Less than one month ago on Orcas Island, I spied my first ever muskrat crossing the road. I wasn’t even sure it was a muskrat until Auntie Janet and I had identified it in my Handbook of Nature Study.  So imagine my surprise yesterday when I saw my 2nd ever muskrat here in Switzerland! We drove to “town” this afternoon to do a little shopping. Porrentruy is the nearby big town of 7,000 inhabitants where Artemis will go to school and where the stores are a little bigger than here in the village. It’s HOT here, so we bought a pack of ice cream bars and sat outside by the little river that runs through the town. And suddenly, there was this muskrat, swimming upstream and muskratting away. Then he hid in some grasses and I took a picture. 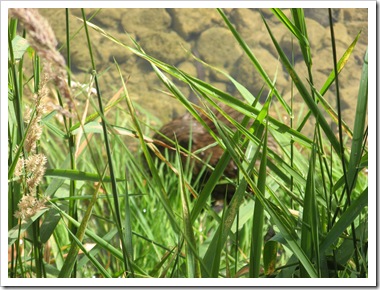 I’m not sure it’s that newsworthy, and there’s lots more to fill in about what we’ve been doing that’s on its way, but that’s the latest on the wildlife front. It just seems amazing to make it forty years with nary a muskrat and then to run across two on different continents in the space of three weeks. How he (or she) differed from the American muskrat, as compared to muskrats of other climes, I can’t really say. Looked the same to me! Except that the American one was moving much more slowly – but he was on Orcas Island after all. For those wishing to expand their French vocab the term is: rat musque (with an accent on the final ‘e’ that I’m not sure how to put in this software.)