The Olga Store was closed this June, but the sight of it still fills me with summery feelings. It’s where we’ve gone to get our ice cream bars since I was a wee child on vacation on Orcas Island. Now my kids get ice cream bars there – or at least they did last year – not this year, it wasn’t open, yet, or not at all. Somehow that didn’t really bother me, because that’s part of it too, it keeps changing hands and starting over – as a fancy restaurant one year, as a deli sandwich shop the next, then back to just milk and s’mores supplies. But it’s a cute old store, and a picture of it makes me happy.

Because there was so much to do, it was time to leave the To-Dos for a few days and head up to Orcas. As we’re getting ready to leave for a bit, I’ve been pondering the sense of place - the places that weigh heavily on us and in us because they were a part of our upbringing, with good and bad memories attached, that make us feel rooted. Orcas Island is one of those places for me – all the more so now that my parents both live in retirement apartments which really have no connection with any other time in their lives.

My mama grew up going out to Orcas in the summer; she took us; now we take our kids. I want them to have that same connection with a tangible place. And because…well, doggone it, every kid ought to learn how to live without electricity and indoor plumbing for a week!! Makes ‘em tougher!

We had five good days with friends and then with aunts and uncles and cousins. My disclaimer here is that when i went to upload more photos – with friends and relations in them, I found that that portion of our home computer network do-hicky had been disconnected and packed up and I can’t. We shall tell the story with the photos we have here. And if you are not in the photos but you know you were there, I shall put you in later. 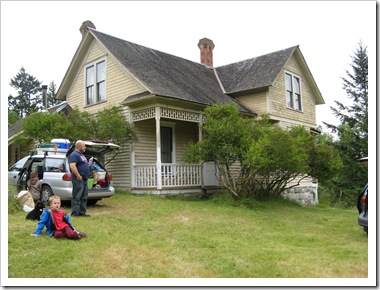 This year because of where we installed the hammock, I got a new favorite view of the Farmhouse. Unfortunately I didn’t take a picture until we were packing up and the cars were also in the view – along with Uncle Sheep and Apollo. But Athena made a lovely sketch of it – maybe she’ll let me scan and post. 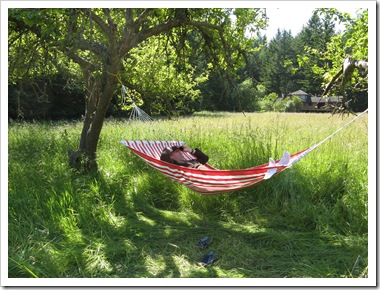 Zeus enjoying his Father’s Day present – from last year. For this year’s gift, we found him a place to attach it and some time to lie down in it. 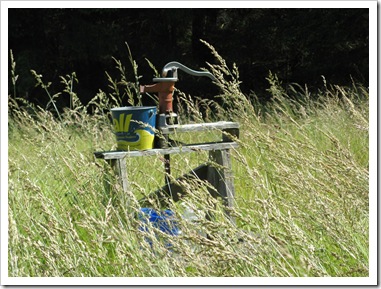 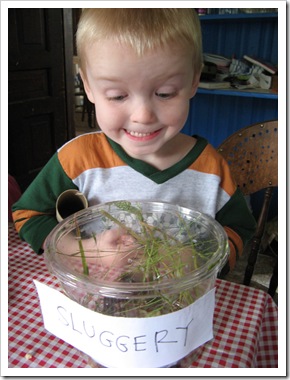 Our first day on the island was rainy, so we occupied ourselves with Nature Study – one of those homeschool subjects that sounds so good in the book but which sometimes doesn’t quite happen in real life. But stuck on an island in the rain with no electricity, do you know what you can do? You can build a Sluggery out of an old cookie tub and study everybody’s Nature Friend, the Slug. Watching him pull his eyeballs in when you startle him and seeing his chompers go to work on a piece of smashed apple, you may find that you’ve quite forgotten to be grossed out by his slimyness. My Handbook of Nature Study says that slugs are covered with tiny scales like crocodiles. The Sluggery was quite a hit with the younger set and the adults just enjoyed saying “Sluggery” to each other as many times as possible. We came to find that they are kind of cute in their own little sluggy way, with their eyeballs and all, as long as we are not stepping on them in our bare feet or trying to grow lettuce. 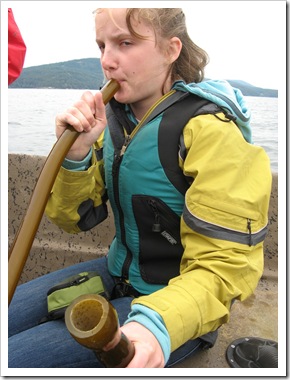 Another day my cousin Tim came over in his boat and took us out for a ride. Because I insisted, Cuzzy Tim patiently slowed down the boat while I fished out some floating kelp so I could teach my children how to make kelp horns. Because we homeschoolers sure like to learn new skilz! I will just add that it is generally difficult to have a flattering photo taken when you are blowing on a kelp horn. 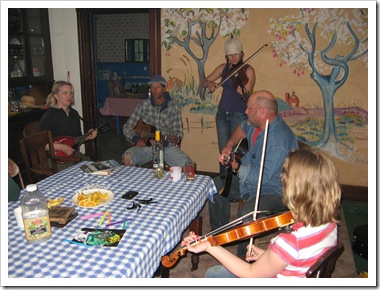 Here is an impromptu family bluegrass jam session. We played the Wabash Cannonball, Angel Band, the Alderbrook Waltz and other famous tunes. 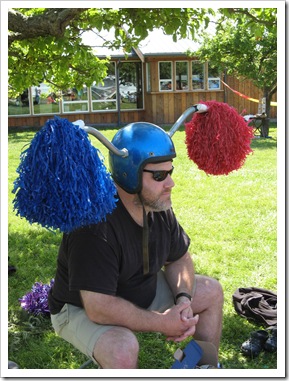 Uncle Sheep just after the Eastsound Solstice Parade. There’s not much else to say about this photo except…WOW!

So then we returned home – refreshed in mind, if tired out in body, and ready for the last big push to pack up the house and say our goodbyes. And we did get to say goodbye to the Farmhouse and reconnect with our “place” and ensure that we’ll return.