Spring was late but it has now finally arrived. The Lily-of-the-Valley flowers - the muguets - are finally showing out of the ground and their tiny bells are turning white. On May Day, when people were out on the French roadsides selling a meagre bouquet for 3 euros, they were like premature babes, snatched from their beds before their time. I was tempted to stop and buy some just for the love of the traditional, but looking at them I knew that they would have no perfume, which is the whole point behind Lilies-of-the-Valley. So I didn't stop. But today, when I went to get the mail, I stooped down to the one that's finally gotten brave enough to bloom despite the chilly weather and was rewarded with the faintest hint of that delicious odor of spring. I was tempted to pick it and bring it inside, my own bouquet, ten days late and 3 euros cheaper, but it seemed kind of unfair. So it's still blooming out there, and I'll stoop to sniff again when I get the mail tomorrow.

In other news, today we visited the town of Besancon, which has a lovely old town built on an oxbow of the Doubs river, which reportedly was first scoped out as a good spot by Julius Caesar way back when. Then Louis XIV had a massive fort built there to protect the city. The fort now holds a bunch of museums and a small zoo with monkeys galore. The girls visited the museums and the boys and their parents visited the animals. Then on the way back down we saw this: 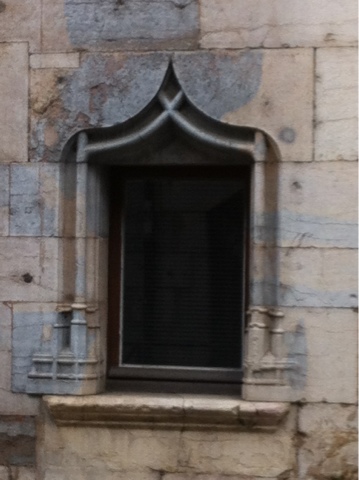 Maybe someday, in my dreamland, I will build a house and it will have a window like this one.
Posted by Unknown at 12:56 PM