Sunday afternoon, and after a good church service this morning, the three big kids are playing Risk around the coffee table in the living room. Hermes is upstairs playing Legos with his Papa. Two chickens and oven fries are all roasting snugly together in my petite oven, and I thought that in between bastes, I would take you on a little tour of our village.

From the south, (that is, the rest of Switzerland) this is the first thing you see in our village: a ruined tower from the 11th century – the Tour de Milandre. It sits on the hill overlooking the village and was used as a guard tower for some lords living further upstream on the small river – l’Allaine – that runs through the valley. In the 1980s a metal staircase was built inside and one can climb to the top of the tower and survey the lands from a great height. If you have a doggy with small paws that might slip through the metal grating, you should to carry her and hold her up to the windows for a view and fresh breezes. 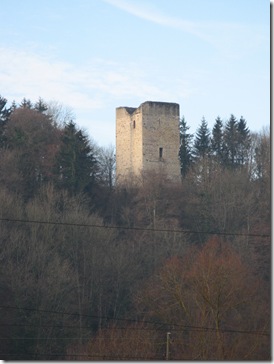 Then you round the bend and enter the village. 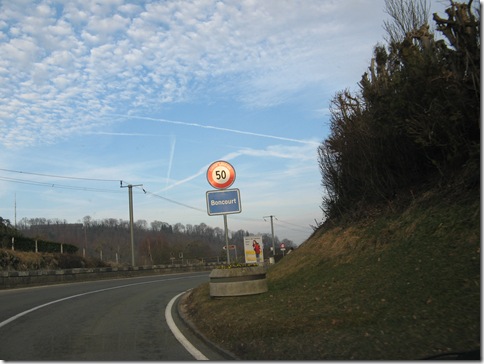 But before you go thinking that it’s all chateaux and history, here is the view as you enter the village from the other direction. 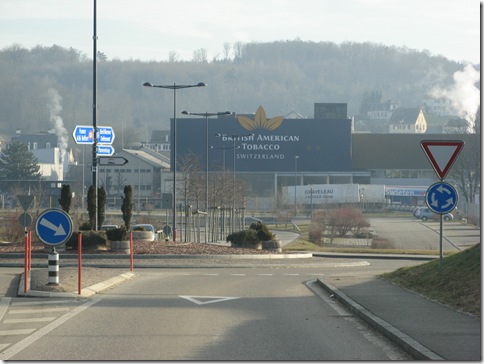 The sign says “British American Tobacco” – as in cigarettes. It’s the cigarette factory that employs about 60% of the town residents. That’s down from what Zeus estimates was 80% when he was growing up.

Back then it had a different name: Burrus, after the farmer who several generations ago started growing tobacco in this area. His factory employed Zeus’ father, his grandparents, and probably some great-grandparents as well, not to mention many aunts and uncles, neighbors and friends. It’s a company town, and when I first visited, it was still the Burrus company and Monsieur Burrus lived in a large house at the top of the hill. People would sort of nod deferentially when he drove on by and they would talk about him and his family by their first names: Monsieur Charles and Monsieur Leon. I found it very feudal and rather odd ~ especially in strongly democratic Switzerland.

When she passed away, Zeus’ grandmother still had a handwritten cookbook from a cooking class that Madame Burrus had given for the young wives of the village. Dotted about the town are some of the fancy old homes of members of the family that now serve other purposes; one is a conference center, one is a rest home, and one was donated to be the town hall, or mairie. Here’s a picture of the latter from the summer – they were doing some maintenance work, the blue tarp isn’t usually there. 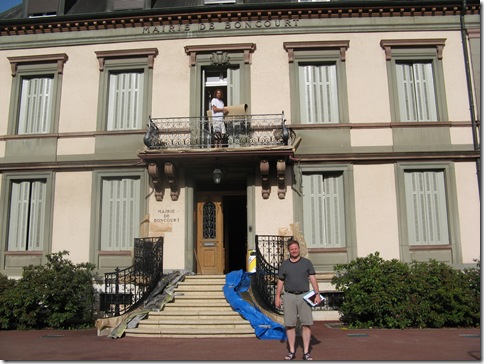 Back at the end of the village with the ruin, when you round the bend, this is the view into the village on the main highway. When I first came to the visit, lo, twenty years ago, the big rectangle on the left was painted as a huge pack of cigarettes. Charming. 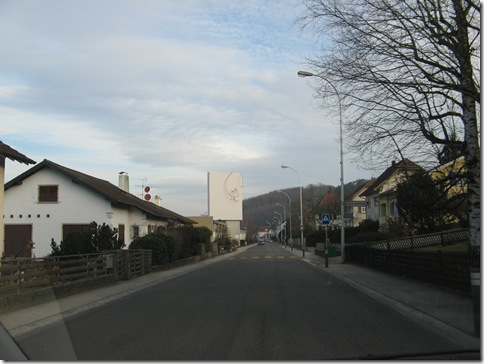 This is the train station. You can see the Tour de Milandre again on the upper right. There is no longer anyone on duty in the station – just an automatic ticket booth. Trains arrive from Porrentruy and points south every hour at :21 past. Then the train continues on to Delle, just across the border into France. After a couple minutes, it comes back, and leaves from this platform heading south at :36. Artemis catches the train here twice a day with the other secondary school kids. 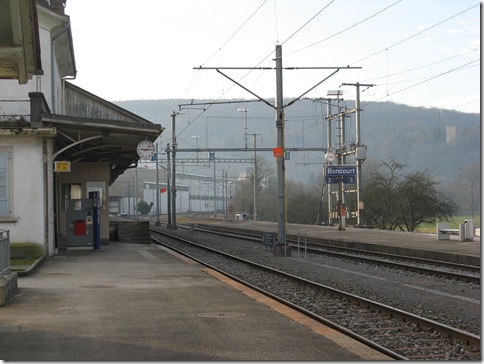 Looking down the tracks the other way. Across the tracks is a big warehouse used to store tobacco. 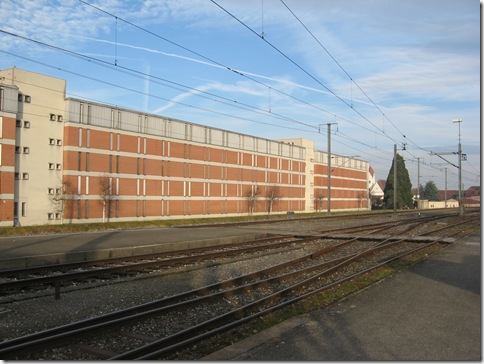 The Hotel de la Rochette – the one and only hotel in the village. Because of the shape and pitch of the roof, it makes me think of a large pink Darth Vader. A pink Darth Vader certainly takes the scare out of him. 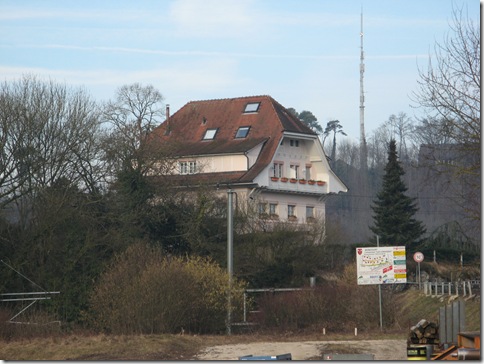 A typical farmhouse and attached barn. Historically, the two shared a roof and a wall. The animals were handy for milking in the winter and helped keep the house warm. There’s a house in the village very near this one that has 1794 carved in the stone over the doorway – the year of construction. 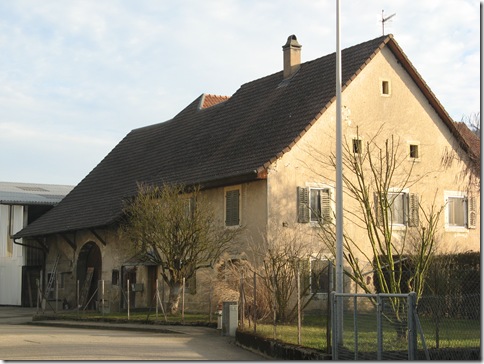 The commercial center of town. Not a PF Chang’s in sight. Instead there is the post office, the bank, our small grocery store (which despite its small size carries refried beans and taco shells!), and a bakery/cafe with curious opening hours – i.e. sort of when the owner feels like it. Fortunately there is a little more parking across the street. 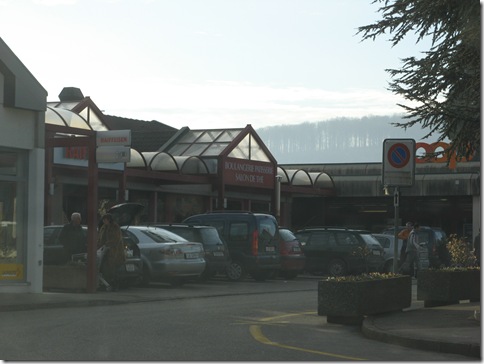 The one main thing not on this little tour is the church. Maybe for another day? I will take some nice photos of it. It does tower over everything else which is very nice and the church bell tolls the hours which I love. Thanks for coming on the tour!

Allrighty, now I have to tell you that it’s no longer Sunday afternoon and those chickens have long since been eaten up. But speaking of food, I have been getting adventurous with fermentation these days! After one friend’s recommendation of homemade sauerkraut as a way to keep nasty germies at bay (Gina), and the encouragement of another (Marijo), I asked for the recipe. I subsequently found roughly the same recipe in the cookbook I recently recommended, and soon I had a big jar of it fermenting on the corner of my counter and a skeptical husband keeping his distance.

One fermentation inspires another, I suppose, because I soon began toying with the idea of making a sourdough starter. Now Auntie Janet has shared several sourdough starters over the years, all of which ended up coming to an untimely end from neglect. But since we are now eating spelt flour and since it’s been years since I ate sourdough bread, I started to get a hankering and wondered how it would work out with spelt flour. I would give it another go. Only this time, I would start from scratch with no packaged leavening and just pick up the lovely yeasties floating here in the countryside. For good measure, I let my mass of spelt flour and water sit next to my compost bin for a few days. Surely there’s some good fungi and bacteria there, right?

Well, it worked – really well!! Apparently we’ve got a good strain here – maybe Boncourt Sourdough will be a new craze. It was for me at any rate. My loaf was soooo good! Hard crusty outside, soft chewy super sour inside. I almost cried, but I was too busy slapping on the butter and salt and chewing. Then I annoyed the rest of the family by telling them over and over again just how good it was and asking them if I had mentioned my sourdough to them yet?

But I hadn’t told you yet! And now I have.  Here is the link to a site with instructions on making a starter and here is a picture of my first beautiful loaf. Ah, so crusty! 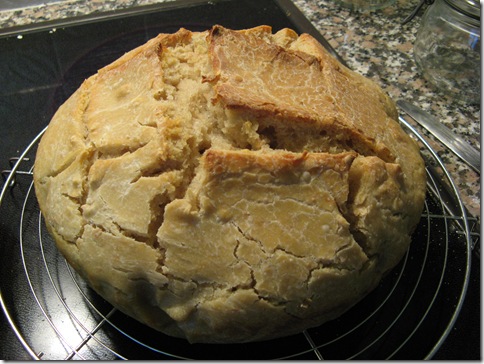 The sauerkraut came out very tasty as well, and when we had it for lunch one Sunday dinner (the week before the roast chickens), everyone had a small bit to try. I didn’t have high expectations, but 50% of my children liked it! And I did, so that made 50% of the family! Hermes was especially surprised since he had been making faces at it. That is why we have No Thank You helpings. Zeus, despite the fact that he grew up in a seriously heavy sauerkraut region (choucroute) does not care for it (– and never has, so I won’t take it personally), but politely ate his No Thank You helping.

The many pots of things fermenting on the counter had been getting to be a bit much for my dear man. So when it came up in conversation at one point, I pressed him.

“So you don’t really like all these pots of fermenting things everywhere, my dear?”

“So you’re not really into fermentation then, honey?”

“So are you ready to give up on all fermented foods then, sweetie?”

Aha! Yes, it was. Wine and cheese are two of my sweetie’s favorite foods – both of which, I think we all know, are fermented!

I think that maybe they are just supposed to ferment a little further away from his personal space. Okay, I get that. I will make my next batch of sauerkraut down in the cellar, and my sourdough starter is now living quietly in my little fridge waiting until it’s time for the next tasty loaf.