Okay, I am feeling a little sheepish about telling you what we’re up to for the kids’ autumn break from school. I mean, a year in Switzerland is already pretty great, right? Does it help if I tell you that this trip to Sardinia was planned over a year and a half ago? Or that Katie is one of my very oldest friends? Or that we got cheap flights on Easy Jet? Or that Zeus had to stay behind because of his new job?

For the sake of propriety, I could, of course, pretend that so far it’s been cold and rainy. But it hasn’t been! Since we arrived on Wednesday it has been clear and sunny and very warm. It’s been the warm summer we never quite got this year. 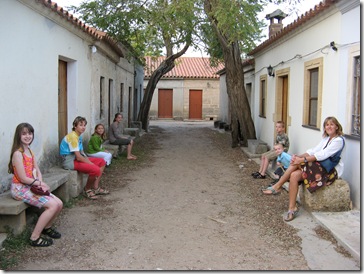 We’re staying with my dear dear friend Katie and her beautiful, hospitable family who making us feel very welcome and that increasing the number of people in their household by 125% for this week was exactly what they had been hoping to do. 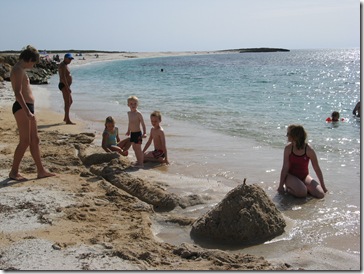 And of course, when it’s sunny and warm you go to the beach! Thursday we packed food, picked up Diego and Anita from school, and headed out. Apparently the Sardinians are done going to the beach for the year; they have switched to jeans and long-sleeved shirts. The people on the beach at this time of year (including us) are foreigners. But really, there weren’t too many people at all and we had a lot of elbow room. 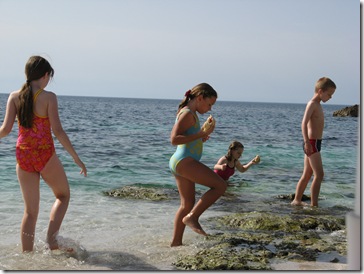 There were yellow jackets though, so the kids ate their sandwiches standing in the water. 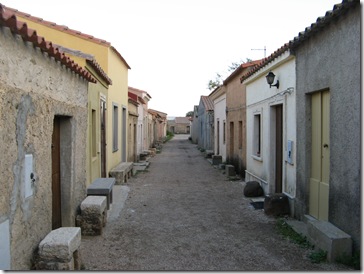 This was a neat old Sardinian town – mostly vacation town now, where some spaghetti Westerns were filmed. I liked the pretty colors of the little houses. 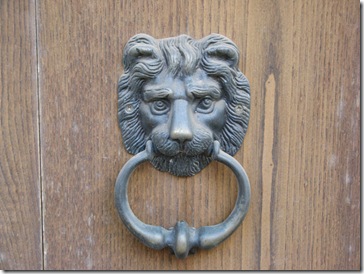 Most of the houses had very interesting door knockers. This one makes me think of Aslan. It might come alive and tell me what to do. 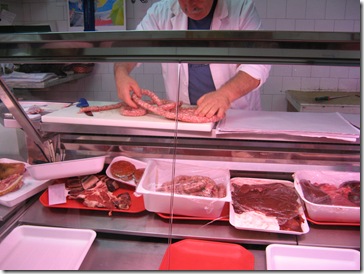 On the way back to town we stopped and bought yummy sausage for dinner. 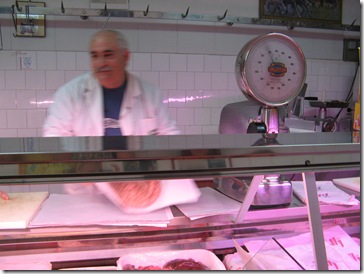 I am learning a little Italian. It usually goes like this:

Katie introduces us as some American friends.

I smile and say Bon Giorno.

Then they smile and are happy.

Italians (and Sardinians, I suppose) still seem to like the concept of larger families, even though the country has one of the lowest birth rates in Europe. The sausage man gave us what we asked for and paid for, and then heaped on about that much again. He was either very generous, or needed to offload a lot of sausage. So we came home with about twice as much sausage as 9 people can eat at one go. Fortunately it is very good sausage as he makes it himself there in his shop, and we are inventing creative uses.

Friday we headed to the beach again because the weather is supposed to change in a few days, and really, that is what we came for – beach flopping.

But on the way out there, we stopped at an old church that was originally built in 470 AD. Very interesting to think about what life was like here then. The Romans were still here then and Christianity had now become legal in the Empire. 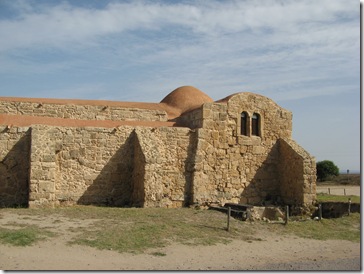 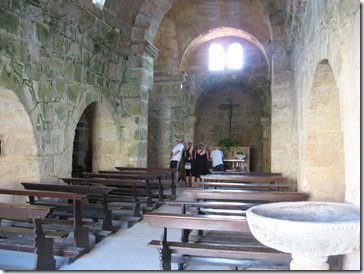 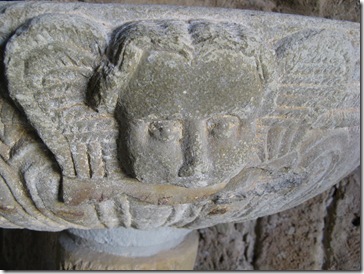 This is engraved on the baptismal font that you seen in the photo above. I think that is what it is. And inside the font is a relief of a fish. 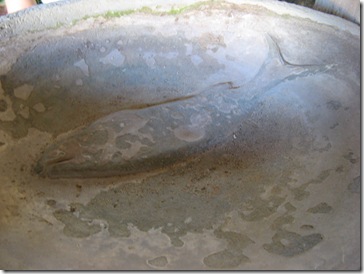 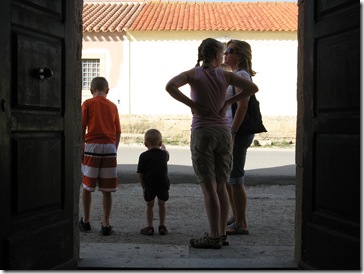 This is a view I see a lot. People waiting for me outside the monument because I am still dawdling inside reading the plaques and taking pictures. But it’s also a photo composition I like – looking out at the brightness from inside the shadowy building.

Further up the road there are ruins from a Phonecian village. We didn’t pay to go in, but Katie, who took the 2 hour guided tour a few years ago, gave us the quick 5 minute version while we peeked over the fence, which was more our speed. 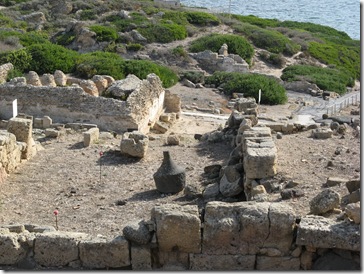 This is a house that is believed to have been the bakery as there is still a huge mortar and pestle used to grind grain. There’s also a big bowl, which I realize only now did not make it into the photo. 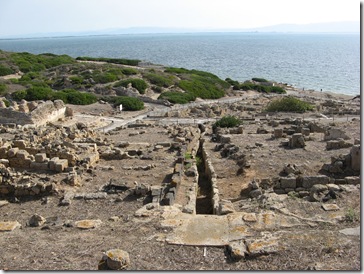 Here’s another spot in the ancient village where you can see the sewage canal running between what used to be a row of houses. The village was originally Phoenician – those seafarers – and then later the Romans came and took it over, like everything else. Later, when Moors kept sailing in from Northern Africa and attacking, the people abandoned the village and moved to a safer distance inland. 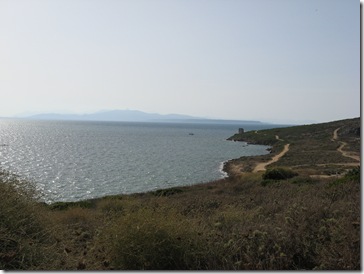 And then our ultimate goal: the beach. 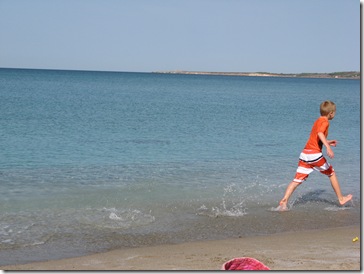 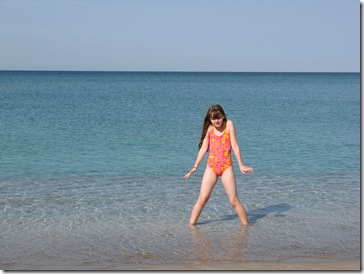 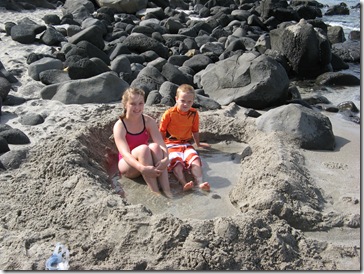 Katie told us when we arrived how Sardinia is pretty dry and lacking in trees, because when the Romans came, long long ago, they chopped down all the trees and took them off to Rome.  Hermes, apparently had been listening, because two days later he found this stick on the beach and said, “Look! The Romans forgot this one!” 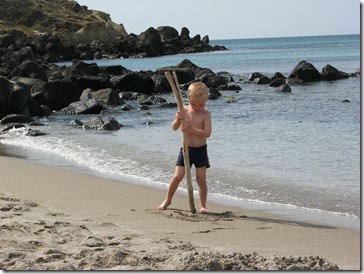 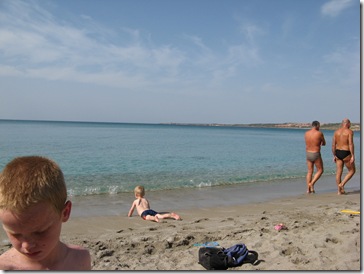 The island seems to be mostly volcanic rock – there are lots of lava rocks around, including these black ones on the point. The fishies like to hang out among the rocks, and we’ve been introduced to Fishy Peeping with masks and snorkels. Katie’s husband Paolo is a marine biologist here, so they all know a lot about the local marine life.

The water is cool but refreshing and super clear and very salty so it is amazingly easy to float. About five feet out, if you put your head down, you find all kinds of fishies swimming around down by your toes! I found it rather addictive, and had to keep going back to see what they were up to. Here are the girls doing some Fishy Peeping (along with some Italian sun worshippers who sort of invaded our space). 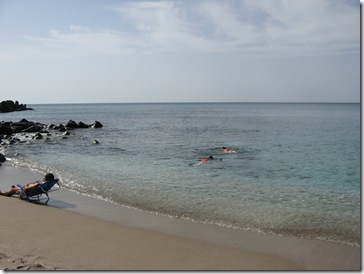 Next on the agenda was to bury each other in the sand. 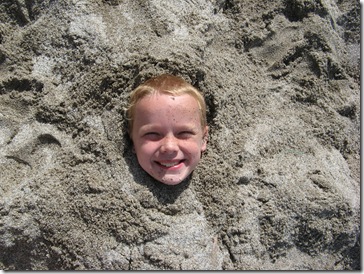 Before it was time to go, I wanted to get a photo of all the kids in the water. But Hermes, who had been buried and got a bunch of sand on his face upon emerging and had to be dunked, was tired and kind of done for the day. So he didn’t like the idea of a family photo, and retreated up the beach for a scream. After a bit he felt better. 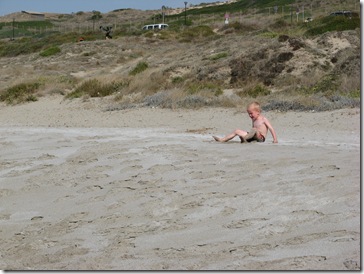 Here are the others. 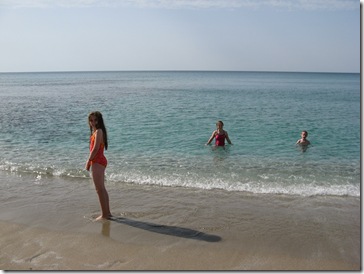 Ahhh!! Heavenly water and air and light. It’s what our brains and bodies have needed after school immersion into French and managing Swiss timetables. Time doing a bunch of not much in warm weather and water. The weather is supposed to change tomorrow, so today while we can, we’ll go back to the beach.