We are on our way up to the Alps again, up to Trun for a few days before school begins on Monday. Then we shall stop traipsing for awhile and settle down into our school schedule. After three years of homeschooling, the idea of a school start deadline feels very serious. So, travel weary as we are getting, we set off again. Athena is especially tired of long car rides, so we bribed her with a visit to Liechtenstein on the way.

We drove up to Vaduz, the capital and walked through the pedestrian zone. At the visitor’s center we bought postcards and some stamps because that is what you do in Liechtenstein. We sat for a few minutes and started writing postcards while the boys watched a little video about the country. Then we called them and continued on.  A ways down the street we realized that Apollo was missing. He wasn’t there! We lost our child! I started to worry and wondered briefly if I should panic, but then I thought, Hey, it’s a small country, he can’t have gone too far!

Zeus ran back, and while I was worried that maybe Apollo would be alarmed when he realized that we’d left without him, he wasn’t. When he calmly walked up with his Papa, he shrugged and said, “Well, it’s a small country. I figured I couldn’t get too lost!” 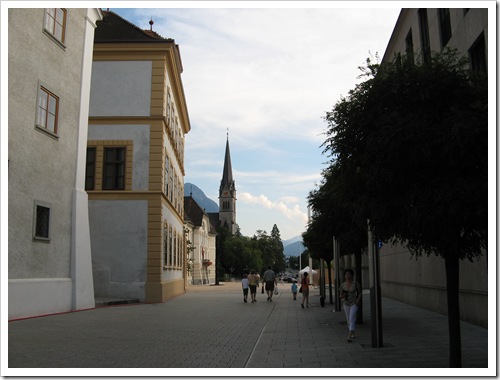 Here is the end of the main pedestrian zone. On the left is the National Museum and further on before the church, the parliament buildings. On the right behind the trees is the National Bank and the National Exchange. So this is like the National Mall – everything is right there. Isn’t that tidy and nice? 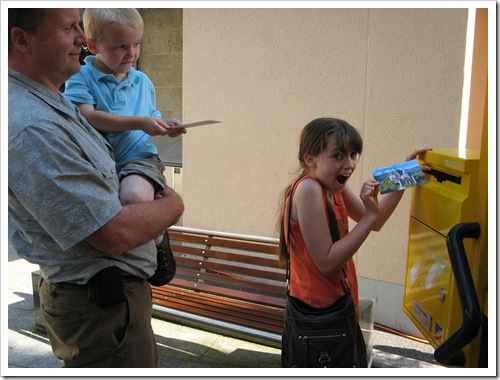 Mailing postcards to Grandpa Chuck who has always wanted a stamp from Liechtenstein. 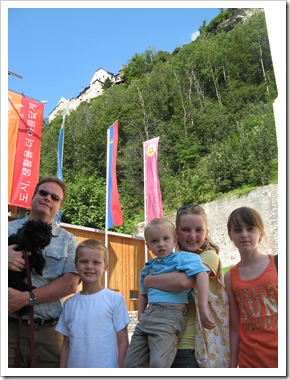 The gang with a shot of the castle above. That is where the Prince of Liechtenstein lives, peering down over his subjects. We were in front of the visitor’s center which flew banners with greetings in many languages. Hence the Asian language greeting in the photo. The native language of Liechtenstein is a dialect of German, similar to Swiss German as far as I could tell, but like everywhere else, English is the commonly used tourist language.

Bella liked Liechtenstein and graced it with a little blessing. A well dressed sixty-something lady who I think perhaps actually lived there (she just looked too put together and camera free to be a tourist) stopped me in the street and admired her, asking me how old she was, how long I had had her and such. She said she wanted to find a little poodle doggy like her. I think she wanted the name of the breeder or something, but I didn’t tell her that she was from far, far away. 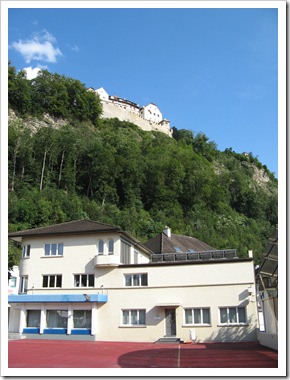 Another, better shot of the Prince’s castle up on the hill. We learned from our Rick Steve’s video that of all European monarchies, the Prince of Liechtenstein probably has the most actual power of the day to day life of his subjects. We did not see him, but what we saw of day to day life there seemed calm and quiet and tidy so I guess he is doing a good job. The one exception was the crabby checkout lady at the grocery store where Zeus bought soup and bread for supper. She was not, he said emphatically, a good ambassador for her country. We did not stay for the nightlife, which is just as well, because I think perhaps there isn’t any. 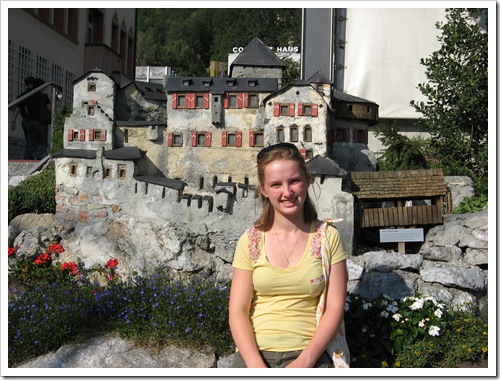 Since we didn’t climb up the hill to the castle, and since they wouldn’t have let us in if we had, there is a very nice model of it down in the square below for photo opportunities.

Overall, it was a nice 1 1/2 hour visit to Liechtenstein (2 hours if you count the drive from the border of Switzerland to Vaduz.) I think it takes more time to drive from Renton to Bothell than to drive the length of Liechtenstein. There is certainly more traffic to get to Bothell. Afterwards it felt very odd to return to Switzerland and to think of it as Big Switzerland in comparison. Another country to check off the list.