This is not usually a curriculum blog, but in the midst of packing and preparations, I have to share about these “worky-bookys” as Hermes calls them, because if I didn’t, I would feel remiss.

They are a set of six, published by Rod and Staff Publishers, and a kind friend gave us the set of six when Athena was a wee child. We used up a couple that year, then Apollo had his turn, and now Hermes is working through the two that are left. But I like them so much, and Hermes loves them ever so, that I think I may order a new set for him to work through the next couple of years. 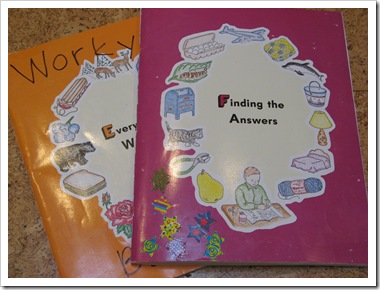 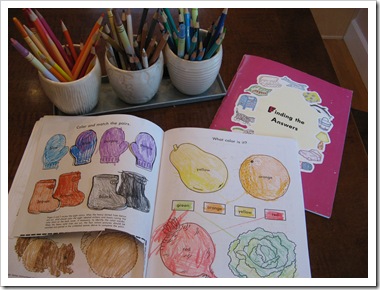 There is something refreshing and appealing about the clean blackline drawings of birds and vegetables. They practice all the proper skills that should be in a preschool workbook (cutting, sorting, tracing, coloring, etc) but without the garishly loud flying monkey cartoons and such that one finds all too often nowadays.

This page practices patterns, but instead of boring geometric shapes, we have birds’ nests and leaves! Isn’t that sweet? 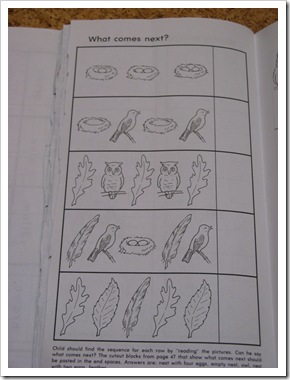 On the opposite page are the options to cut out (an nest with four eggs, an empty nest, an owl) and paste. There is also an exercise that practices sorting and classifying birds and insects and drawing a line from each to the correct kind of home. But look out! there’s something there trying to trick us that is not a bird or an insect! 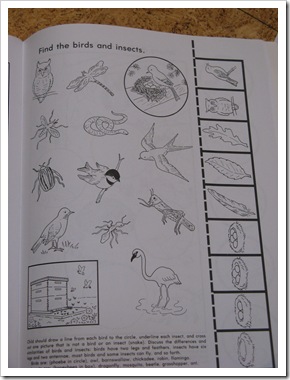 To be honest, Hermes doesn’t do too much worky-booky. But at the start of the school day, on the days he doesn’t have preschool, he gets very excited to get out his very own book and his crayon box, just like his big sisters and brother, and have his mama’s attention all to himself for a little while. Sometimes I catch the siblings glancing wistfully over at drawings of acorns and squirrels, wishing perhaps that their math still consisted of drawing a path from the squirrel to the nut.

After a page or two, with his attention tank filled up a bit, he is glad to run off and play Legos and trains while his siblings carry on at the table.  And mama enjoys the therapeutic nature of sitting with her little man and helping to color inside the lines. It’s a little more straightforward than circumference and radius.