Another year gone ‘round and another birthday for Athena-lou-lou. This year her birthday fell on a Thursday and happened to be the same day as our once a month Girls’ Book Club. Athena was delighted, and after we’d discussed The Phantom Tollbooth

(Athena gave it 4 stars out of five, the other girls 2 1/2 –3) in our library meeting room, the girls joined us at our house for a little tea party.

Athena had diligently planned and baked delicious gluten-free pastries in the days beforehand. As we were setting up before leaving for the book club meeting, it occurred to us that perhaps we should have tea cups for a tea party! I admit, that I am not a natural born tea party girl, like some friends I know. But I knew I had some tea cups from my grandmother, and hunting around for those I found lots more tea party lovelies. I’m trying to de-clutter and simplify life in advance of the moving to Switzerland adventure, but in this instance it was wonderful to be able to use the ancestral frillies.

And besides, they are pretty. They make me think of the quote from William Morris: “Have nothing in your house that you do not know to be useful, or believe to be beautiful.” Fancy tea cups may not be the most useful things, or the most practical, but on the right occasion, they are beautiful and perfect. 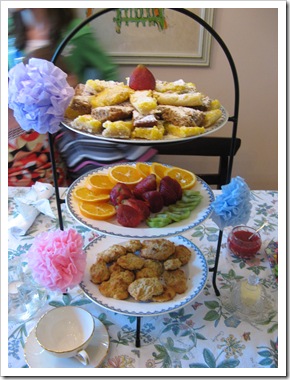 Athena and her Book Club Friends – note the little mushroom forest in the corner. Either the fairies brought them on Easter morning or one of my girls likes mushrooms as much as her mama. But oh, heavens! Apparently the maid forgot to iron the tablecloth! Avert your eyes. 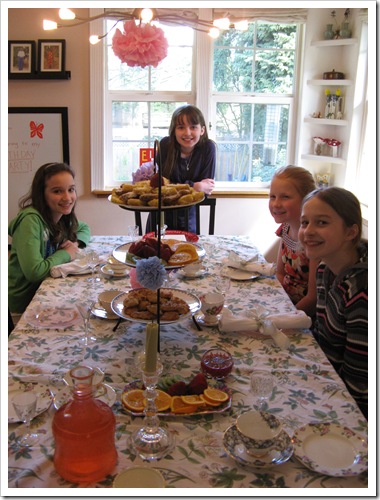 For each of her guests, Athena embroidered their initials on a linen napkin. I am proud of her skills! When we lived in Switzerland before, I collected old linen napkins at thrift shops, because well, they are useful and beautiful! William Morris would be pleased. We thought we could share them since we are headed back to replenish the stash. 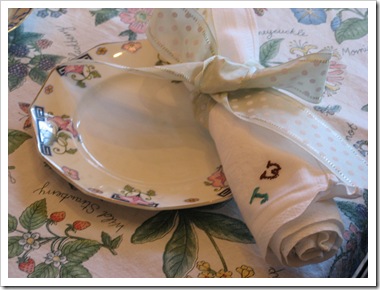 Artemis, who likes baking and confectionery, offered to make the cupcakes for her sister’s party. And Athena chose what looked to me like the most difficult ones in the Hello, Cupcake!

cookbook – Butterfly Cupcakes. They turned out beautifully! I am proud of Artemis’ skills also! 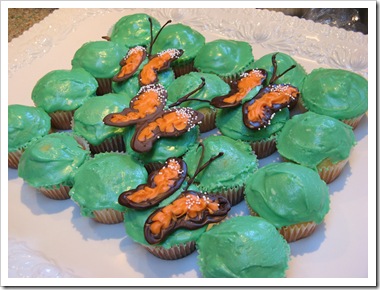 A little while later we were joined by more family members for a casual taco dinner, and then, yes, we managed to get 11 candles on a cupcake.

And incidentally, when one’s girls get a little older and have better motor skills around the antique tea cups, tea parties are a lot of fun! I think we shall have more of them. Here’s to a wonderful new year, Sweetheart. 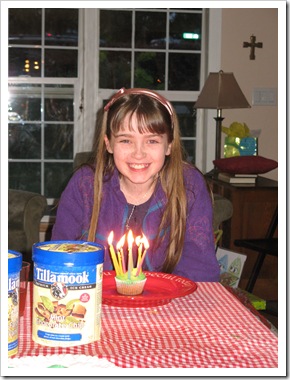